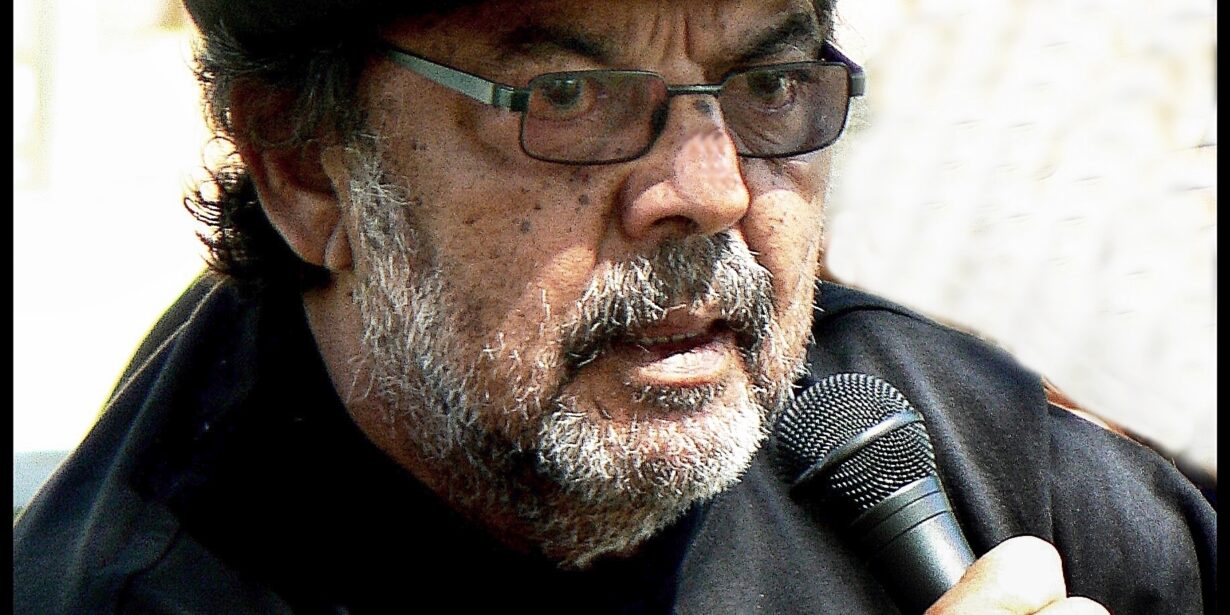 It’s hard to imagine, nearly seven decades on, what the kid growing up in the caravan on Little Mindil Beach thought life would hold for him.

Most meals were caught fresh from the sea in front of him, though goannas were sometimes a nuisance as they stole bread from the caravan.

But, if nothing else, it was a childhood introduction to saltwater country that would inspire him for forty years of activism around Aboriginal land and sea rights.

John Christopherson — “Christo” as he was known to many — was born at the old Darwin hospital just up the road from Little Mindil.

His mother, Judy Jane (known as Jane) and father Chris lived a pretty straight forward life; Chris as a labourer and gardener.

Jane, an Ulbu Bunidj woman, had led the first eight years of her life in the bush in and around Mt Borradaile and Cape Don, before being sent to Darwin for schooling.

The family pretty quickly grew to seven kids: Jo-Ann, Christine (deceased), Bruce, Donald, Carol and Peter so the move was made to Bayview Street in Fannie Bay and then Bamboo Street in Nightcliff — both still only a stone’s throw from the saltwater.

It was as a kid in Fannie Bay John first met his maternal grandmother, Lucy Wilmarga, and adopted father Milbur, and it was this experience that focused his existence as a member of the Murran clan — one of the four traditional owner groups from the Cobourg Peninsula — and what became a lifetime connection with western Arnhem Land. In 1964 his father made a trip to Cape Don in Cobourg where he met many of his extended family for the first time and helped John maintain that connection.

John went to Parap Primary before finishing his school days at Darwin High in 3rd Year.

As a young bloke, along with many other Aboriginal kids in the day, he became and active sportsman — playing for the Nightcliff Dragons in rugby league, and then Aussie rules with Waratahs before turning into a diehard Buffaloes player and supporter.

In 1969, John started an electrician apprenticeship with the Department of Works, and in 1975 became an electrical tradesman working on remote community power stations including Ngukurr and Murganella.

He eventually became foreman supervisor in 1976. Cyclone Tracey led to a period with his wife, Jenny, and the first of their young family at Cresy in Victoria where, in between working at a timber mill, he played as the only blackfella with the local footy team.

In that same year, John came third in a qualifying heat for the famous Stawell Gift — a placing he didn’t chase as he had by then returned to Darwin.

The big change in John’s life came in 1979-1980 at Aboriginal Task Force in Adelaide along with others such as Owen Cole, Tracker Tilmouth and John Havnen.

He completed a Diploma in Business Administration before returning to Darwin in 1980, and an 18-month stint with Department of Social Security in Darwin and then another 18 months in Canberra. 1983 saw him return to the north as regional manager of the Aboriginal Development Commission for the northern region helping establish community economic development projects.

John Christophersen will be laid to rest at the Botanic Gardens on Friday morning. Picture: Supplied.

It was a period in which his activism in defence of saltwater country came to the fore.

After his marriage break up he spent much of his time “on country” either by himself or among his brothers and family at the Gul Gul and Marreyah areas.

He had little money but became an international traveller advocating for the rights of traditional owners around the country and overseas.

As one of the Cobourg representatives on the Northern Land Council, he would serve on its executive 1986-2000, including a two-year stint as its deputy chair 1987-88.

It was as deputy chair John played a major role in the thousands that travelled from the Kimberleys and Top End of the Northern Territory to join the anti-Bicentenary march in Sydney for Invasion Day in 1988.

A growing convoy of buses left Darwin, Katherine, Tennant Creek and Alice Springs before heading to Port Augusta and across to Mildura and Mittagong before ending up at La Perouse — by which stage an estimated 1000 Aboriginal people had joined the convoy.

John’s account of the 11,000 kilometre journey, in the Land Rights News of May 1988 should — in many ways — be required reading for all Australians.

It is an at times emotional tale including bus break downs and a death; of driving all night; of dancing and singing; of hope and solidarity.

Above all, it is a story about determination and unity for “all Aboriginal people in Australia”.

Throughout this period, John was passionately involved in key actions around sea rights — especially in the face of commercial fishing.

From 1989-2001 he was a member of the Cobourg Peninsula Sanctuary and Marine Park Board, which he went on to serve as chair until 2006.

At various times across that time he served on the Cobourg Fisheries Management Advisory Committee, the National Federation of Land Councils, Indigenous Protected Areas National Working Group, as well as serving as Vice President of the World Council of Indigenous Peoples.

He became something of a seasoned international traveller, visiting South Africa on the eve of the elections of its first post-apartheid government, as well as visits to North America, Asia and Europe.

As he would tell it, he would pack his “bush bag” drive in to Darwin and then head off with little but a change or two of clothes and his passport.

On one occasion, as he recalled, he discovered to his horror three bullets in his bush bag minutes before going through security at Sydney airport.

He turned them into an official … only to find on his return to Cobourg some weeks later he still had a remaining bullet which he had carried through security across the world!

After living in the bush for some years, John returned to Darwin in 2000 to establish and manage the first Men’s Health clinic at Danila Dilba, the Aboriginal community-controlled health service.

Between 2005-2008 he worked at the Northern Land Council as its Sea Policy Officer.

From this role he was the Acting CEDO of the land council until 2008.

This was a period of intense legal and political battles — which have yet to be finally resolved — which resulted from the High Court Blue Mud Bay decision which recognised Aboriginal rights extending between the high and low water mark adjoining Aboriginal land.

Between 2009 and 2010 he worked as a consultant to the Northern Territory Government on Blue Mud Bay issues.

He was instrumental in the development of the Cobourg Marine Park Plan of Management and in providing evidence to the Croker Island Native Title Sea Claim.

Across much of the last decade, John’s activities focused on the Northern Land Council, as a representative of Cobourg and Kakadu and executive member.

He became the longest serving member of the Northern Land Council.

Those who knew him will recall his passions, and of course his willingness to engage

in argument, whether it was about footy, politics or sea and land rights.

And, of course, he always liked to get the last word — and learn from the sea and land

country he loved and protected.

So perhaps it is fitting Christo gets the last word here. Sitting down at Uluru Kata Tjuta National Park last year, celebrating the closure of the Climb by Anangu Traditional Owners, he recalled what he said at the last Garma Festival he attended:

John is survived by his mother Jane and siblings, his daughters Natalie, Jack, Mia, Nova, Vanessa, Ashley, Shilo, Channoa and son Credence and many nephews nieces and grandchildren.