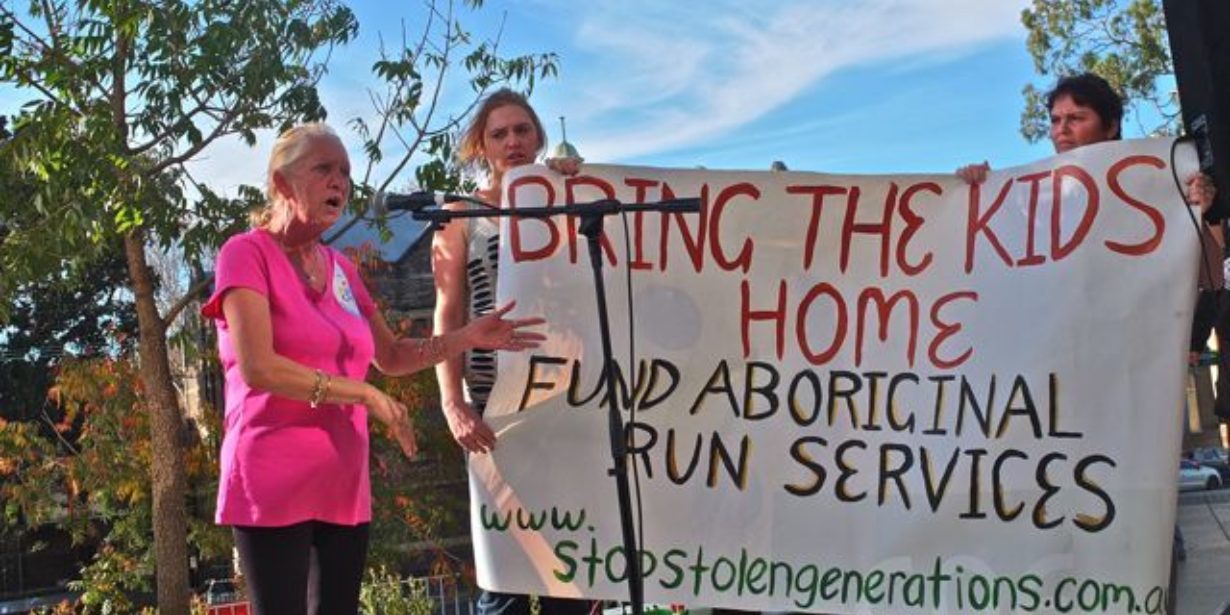 "We have to stand up as one and give our babies a voice - We haven't abandoned them, we love them, we want them back where they belong" - Aunty Hazel Collins - Founder of Grandmothers Against Removals

In early 2014, Hazel Collins' grandson Tyson was removed from Hazel’s daughter Helen Eason, by four Department of Family and Community Services workers (FACS) and several police officers. Baby Tyson was Helen’s forth child put into care, due to past challenges with drug addiction. In Tyson’s instance there was no risk.

After healing from the traumatic experience, Aunty Hazel spoke with other grandmothers in her community only to found out many had been in similar situations. Hazel realised just how systematic the removal of Indigenous children from their families was, so in Gunnedah NSW, the Grandmothers Against Removals movement began...

Hazel's was no stranger to having Australian Child Protection policies affect her life. Generations ago, an Irishman raped her great-grandmother who then bore two girls. Both of these girls - one who was Hazels grandmother - were taken and put into the Cootamundra Aboriginal Girls' Training Home.

This year marks the 10-year anniversary of the National Apology, issued by Australian Prime Minister Kevin Rudd and delivered to Australia’s First Peoples, acknowledging the tens of thousands of Aboriginal children who were removed from their homes from the late 1800s right up until the 1970s – these children are now known as the Stolen Generation.

In 2017 the number of Aboriginal and Torres Strait Islander children living in out-of-home care had risen to an estimated 17,664 children… and this figure has almost doubled from 9,070 - a decade ago. Hazel's family contribute to these numbers.

The GMAR (GrandMothers Against Removals) movement is fighting against the systematic removal of Aboriginal children from their families and calling out what Aunty Hazel calls the mispractice of child welfare officials.

Aunty Hazel shared her story with CAAMA’s Teghan Hughes… but not before she shared her dissatisfaction over the recent remarks from David Gillespie and the Sunrise panel….