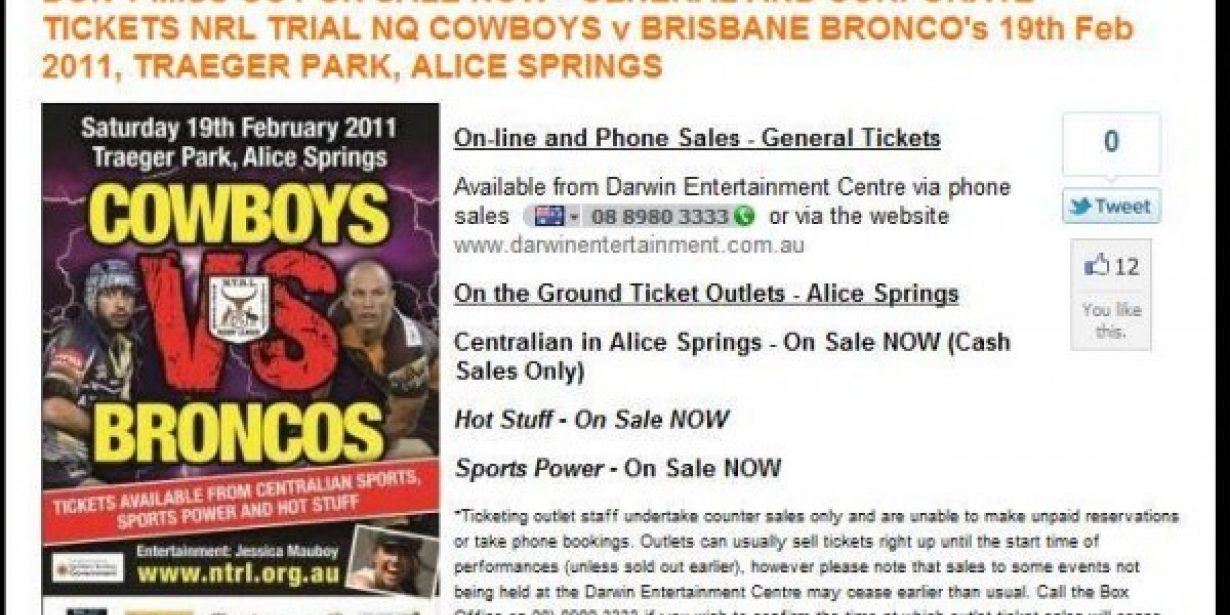 NRL comes to the “ALICE”

COWBOYS READY TO GROW RUGBY LEAGUE IN THE NORTHERN TERRITORY

The North Queensland Toyota Cowboys are mere days away from touching down in the Northern Territory ahead of their historic trial game against the Brisbane Broncos in Alice Springs, ready and raring to extend the reach of rugby league to Australia’s top end.

While the team has been busy training for the hit out on Saturday 19 February, players are also preparing to spend a week immersing themselves in the Darwin and Alice Springs communities as they promote the game they love.

After arriving in Darwin on Sunday night, the boys will spend two days visiting schools and the city’s hospital as they connect with their fans and attempt to recruit a few more.They’ll also run clinics for primary and secondary school-aged children at Richardson Park, highlighting the club’s commitment to developing the next breed of rugby league superstars.

“Being an NRL club with such a large footprint across regional Australia, we are already very effective at extending the game to the far reaches of the country, and we hope this visit will only further that objective,” Jourdain said.“We know the NRL hopes to capitalise on the growing popularity of Rugby League in the Northern Territory in coming years and we’re very happy to be a part of that expansion.”

“We are committed to the promotion and development of our club and the code and this venture with the Northern Territory Government is only further proof of that.”Following their time in Darwin, players will then head south for Alice Springs on Wednesday to continue their community work with further visits to schools and hospitals, as well as several coaching sessions with youngsters.

The trip is part of a three-year partnership with the Northern Territory Government aimed at promoting sport and healthy lifestyles throughout Darwin, Alice Springs and surrounding communities.

Minister for Sport and Recreation Karl Hampton said the Cowboys’ presence in those areas is invaluable.

“Territorians from the tropics to the desert love their NRL and it’s wonderful to see the NT’s adopted team out in the community spreading the word and building the excitement ahead of Saturday night’s big game,” Hampton said.

“Having these sports star role models here will do wonders for the communities they’ll be visiting and will only serve to accelerate the growth of rugby league and sport in general.”

The Cowboys’ second pre-season match of 2011 against the Brisbane Broncos will be played at Alice Springs’ Traeger Park on Saturday 19 February.

It signifies the first time an NRL trial game has been played in Alice Springs, following on from the success of North Queensland’s trial against the Titans in Darwin this time last year.